I've been having a good old whinge to myself, about the paucity of dragonflies at Birk Bank, having not found one yet, despite two recent visits over the past few days, and it was now mid-June. But Thursday changed all that big time for Steve and myself, when a couple of hours pacing up and down the boardwalk at Birk Bank, with periods of standing and staring, yielded a decent haul of 36 dragonflies, including a couple of date and number surprises.

The day started at Bull Beck were I was keen to establish the Sand Martin situation. I had found none here on my visit 22 April, today we found the bank had partly collapsed and counted just five nest holes, and no more than 30 Sand Martin. But compensation came in the form of a Banded Demoiselle, a good record anywhere in North Lanc's, but overshadowed by 50+ reported at St Michaels on Wyre on Wednesday 15 June. Our individual at Bull Beck was followed a couple of minutes later by a Hummingbird Hawkmoth....A good start to what was to develop into a good day.

Thursday wasn't particularly a birding day, but we were welcomed to the car park on Rigg Lane by a singing Garden Warbler. Just up the track a juvenile Stonechat was on the fence post, seen as a lone individual, it was at least my first proof of breeding here. More evidence of breeding was a pair of Meadow Pipit, with one bird carrying food, later a singing male Blackcap. 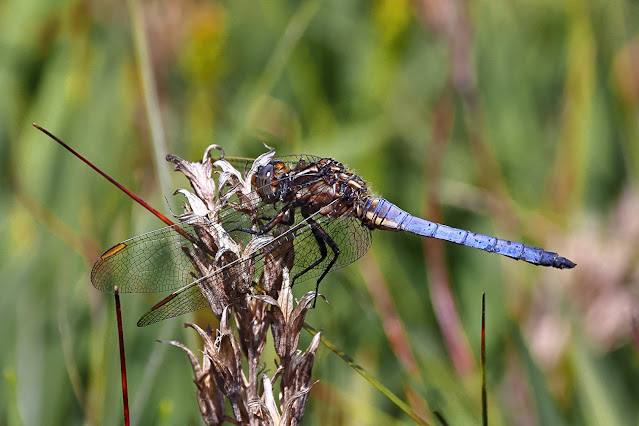 On to the bog, and the surprises came in the form of 5 Keeled Skimmer, including a female seen ovipositing. 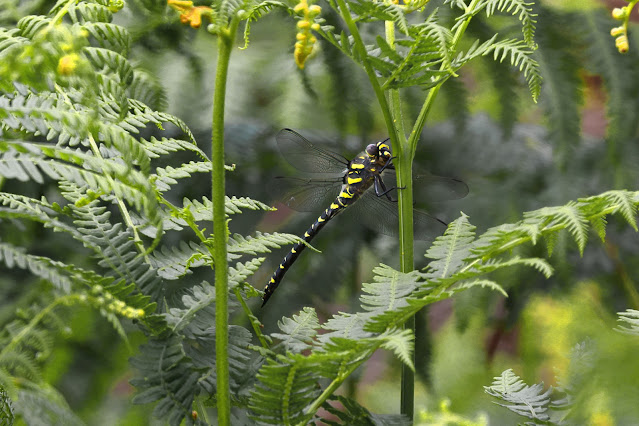 These were followed by the surprise of the day, when the first of 2 Golden-ringed Dragonfly flew across the bog to go to rest on bracken beyond the boardwalk. This species was more likely to have been seen two weeks later, with average emergence from the beginning of July.

There was a sum total of 15 Four-spotted Chaser, and 14 Large Red Damselflies, also pleasantly surprising was the count of 32 Small Pearl-bordered Fritillary. Other butterflies were less impressive, with 4 Small Heath and a lone Small Tortoiseshell seen.

A saunter along the track to Ottergear Bridge, where we found parasitic Cuckoo Bees Bombus sylvestris on Heather, which is more expected to be in flower in August than mid-June. Earlier we had seen in the near distance, a dragonfly in flight, and eliminating the few possibilities, although like the Golden Ringed Dragonfly an early date, and would have been less of a surprise in a couple of weeks time in early July on first emergence, we concluded it was a Common Hawker.

I'm grateful to Steve Graham for his company on what was a memorable day for the pair of us. I'm also grateful to Ian Mitchell for the excellent images including the stunning Four-spotted Chaser header.

This Zebra Spider was on the frame of our greenhouse, the speed of the hapless insect was such, that my camera wasn't able to record it arriving on the frame. The camera also struggled to record the spider pouncing on its prey, but I did slow the motion down in the second video to show the attack. The Zebra Spider can jump up to 10cm, it anchors itself by gluing a silk thread to the surface it is jumping from, you can see it dangling from the thread after it pounces on the victim....View Full Screen.