In most UK winters the Brambling is a difficult one to find but a bird to prize. These cousins of the ubiquitous Chaffinch live north and east of here on the borders of Finland & Russia, venturing this far west in irregular numbers and unpredictable years.
At the feeding station I‘ve listened for the nasal wheeze, watched the feeders and the ground beneath for weeks while studying the hedgerow for a flash of white rump amongst the Chaffinches. And then on Wednesday, joy of joys, at last a Brambling, crouching amongst half a dozen Chaffinches, an orange neighbour, reward for the seed drops and the interminable car washing after the tortuous muddy farm track. 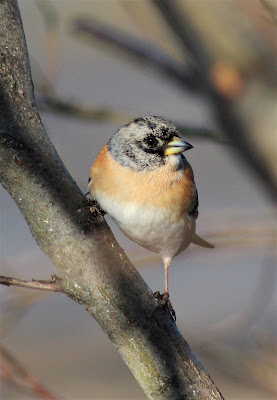 Brambling
The finches scattered for no reason when I saw that the Brambling, now in a nearby tree, was male, perhaps even an adult but not for definite until and if we catch the star.
Not that there’s any ringing just yet while Avian Flu is still nearby and APHA, the Animal & Plant Health Agency drag their feet on giving the all clear. Seven weeks, going on eight while waiting to hear when we can collect information for conservation. In the meantime and if at a loose end I could take up shooting birds as that’s allowed. Shooters have a route to the top, ringers do not.
A couple of Reed Buntings, 3 Greenfinch, a couple of Blackbirds and 20 or more Linnets completed the count as I scattered more seed in the base of the hedgerow where even the Sparrowhawk’s long legs won’t reach.
Here, and later back home, garden Greenfinches were in song, more species that so soon can see that spring is about to sprung. I saw Brown Hares on the move too, three together in the first of their Mad March ways. 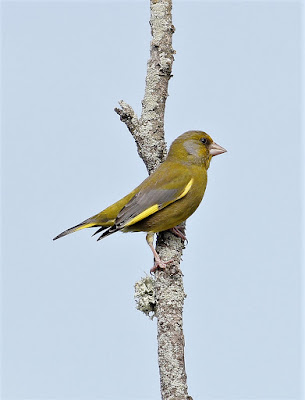 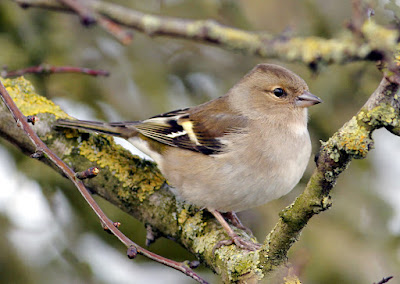 Chaffinch
I left the Pilling farm and drove to Cockerham where at weekend Andy and I had prepared the seed plot for our now annual whoosh netting of Linnets and the sometime bonus of Skylarks and Stonechats. But never the wary Stock Doves that scatter at the sight of a vehicle.
For the uninitiated, the idea of a whoosh net is to propel a fine net over ground feeding birds via elasticated bungees. The method is somewhat hit and miss as it requires the said birds to land in the tiny designated/prepared area and settle there long enough for the net to whoosh over them. Oh how we laughed when sitting for hours watching Linnets fly round and around without showing any interest in a mound of fresh, tasty bird seed that would mysteriously disappear before our next visit. 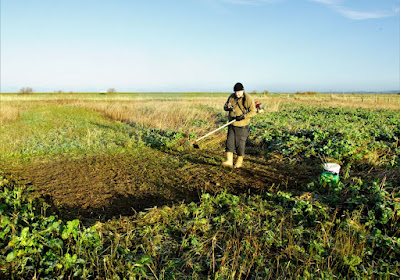 Prepping the Square
The local Kestrel hovered above, and never one to miss a trick, has discovered the seed to be a regular source of animal protein. I dropped more rats and mouse seed and promised the 60+ Linnets we’d be back when APHA and BTO give us the thumbs up. 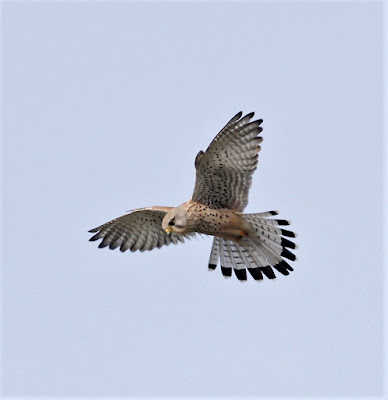 Kestrel
After a number of years of sympathetic farming the most recent owner of Braides Farm has vandalised the place, torn out every perching fence and singing post, filled and levelled the vegetated ditches, built a huge midden of earth, and now imported hundreds of sheep to eat what’s left of the once green landscape.
If there are any Skylarks this year, they’d best keep clear of grazing sheep. In the distance and mostly on an adjacent farm were up to 100 Whooper Swans and not much else. Once again, it’s “follow the money” to see that conservation and wildlife hits rock bottom in the Tory Grand Plan to level down.
At least at Conder Green there are birds to see if a little early for the return of the bad boys the Avocets, black and white birds represented today by three Shelduck recently returned from their winter in the Wadden Sea, Dutch or German, take your pick. 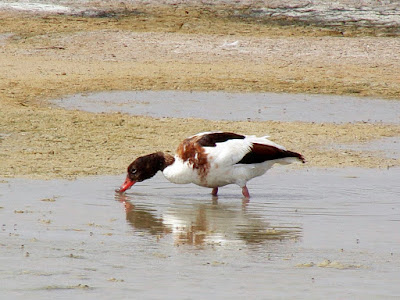 Shelduck
A single Little Grebe proved hard to locate, they too are heading back from whence they came for the coming spring. Wigeon were in good numbers of 60 or more, some hidden behind the islands while the tiny Teal were so numerous but scattered throughout that any count would be very inaccurate. 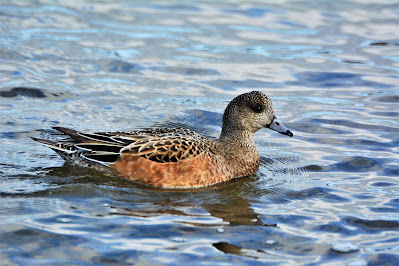 Wigeon
Five Snipe moved around the mound of the near island and not seeming to hide as they mostly do, perhaps feeling safer on an island. Small numbers of Redshank, Oystercatcher and Curlew finished the wader scene.
Time flies when having fun even if it’s the many and varied birds of spring that I’m really after so I headed home for a cup of coffee and to search my emails for one from APHA.
No luck. Try again another day.