North shore
Pale-bellied Brent goose 32 (at least). I walked out to the skear at 11:00 (MD). I couldn't see any Brent out from the children's play area from the top of the steps, but when I reached the bottom of the steps, there they where!. They were so close in that from the top of the steps only their backs would have been visible and I was looking for their pale flanks. I sat on a rock and watched 23 of them walk past me, feeding as they went. They seem incapable of standing still to feed. As ever, they were led by the Canadian ringed birds.
I was really pleased this morning, there were several dog walkers in the area, but they were all aware of the Brent, pointing them out to others and controlling their pets so as not to disturb them.
When I returned from the skear at 12:15, all the Brent were out from the play area and had been joined by others there were at least 32 then and all seen were pale-bellied.
Pink-Footed goose 57 - an unusually ragged and silent flock came from the west and headed inland over Heysham Head. One does call once towards the end of this clip, but that was it.
Eider 130+
Red-Breasted Merganser 2 (pair)
Great Crested Grebe 1
The only waders on the middle skear were c500 Oystercatcher. There was a handful of Redshank and Curlew on the inner skear.
South shore
Shag 1 (at least) juvenile. Tim checked at low water in the morning, and took this location shot of one resting on the lower struts of an upstand near the waterfall.
I checked towards high water (15:30)  this juvenile Shag was in the harbour mouth, I zoom out to show the location, the wall in the foreground is the one around the lighthouse.
Also, at the same time from the lighthouse, the ringed Rock Pipit was feeding on the sloping wall. This is the male of the breeding pair that nest in a hole in the harbour wall below the lighthouse.
One of three Rock Pipits today
Wigeon c150 in the evening
Shelduck 14 in the morning
Pale-bellied Brent goose 26+ on Red Nab at 16:15.
Finally here are some excellent images taken by Craig Bell yesterday, please open them to really enjoy the image quality.
These next two shots are just out of the recording area, at Sandylands, please remember yesterday's request to respect the privacy of residents in this area.
First the Black Redstart
Plus a Siberian Chiffchaff! - the only record of this bird was Craig's brief sighting yesterday. 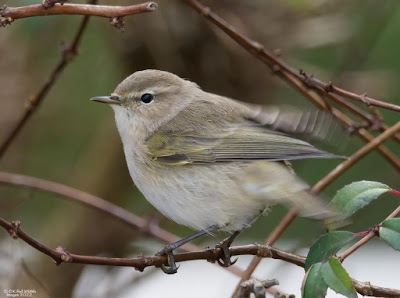