We swop and change our ringing sessions according to available bodies, the weather, and the theory that too many or too few days at the same location is not normally a good idea. Hence, Wednesday saw three ringers, Andy, Bryan and me back at Oakenclough, 15 miles from the coast, 700 metres above sea level at our autumnal site for catching Redwings and other migrant birds.
We have learned that when weather conditions are suitable many bird species use this edge of the Pennine Hills as a part of their migration route, east to west/west to east or north to south/south to north. Very often the directions of travel change mid-stream or are impossible to decipher if birds disappear from view by distance or landscape.
Examples of visible migration become especially evident during October when it is possible to witness nocturnal and diurnal migration of large numbers of northern thrushes like Redwing, Fieldfare, Blackbird, Song Thrush and Mistle Thrush. The most numerous of this group are Redwings and Fieldfares, species that migrate on any given day but whose migration is wholly unpredictable and may be as small as a few dozen individuals, or on occasions many thousands over the course of a single morning.
The forecast for Wednesday of brightness, zero rain and a 8/10 mph breeze looked almost perfect so we arranged to meet at 0645, just before dawn. The drive up to Oakenclough is a steady climb in third gear so as to maintain a respectable speed while watching for unpredictable deer and roadside pheasants that can dent a moving car. Gaining elevation and ever closer to my destination the low cloud turned to mizzle & drizzle as visibility dropped to 20 yards. Parking up there was a 15 mph wind rattling overhead trees and the weather forecaster was treated to yet another expletive.
We concurred. If Redwings had been on the move during the night and into morning they could well be around despite the unwelcoming weather, so we set nets and hoped for the best.
Amazingly and even in these poor conditions, Redwings arrived. They came slowly at first, with four Redwings on the first look at the nets. And then more of them, and also other species as the morning wore on. 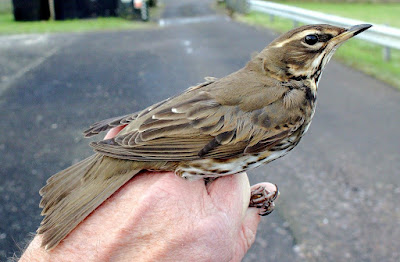 Redwing
About 0920 and without warning a flock of almost a thousand Redwings arrived from the east and circled around for a few minutes before flying west. The same thing happened again later as at least two more large contingents of several hundred Redwings arrived and left to the west, as did smaller parties of tens and twenties, sometimes mixing with flocks of finches disturbed from the treetops by the swirling Redwings above them.
Cloud and drizzle encircled us north, south, east and west as it ebbed and flowed, appearing to ease off before starting up again, but all the time we added to the catch. At 1030 real rain arrived to replace the mizzle as an unwelcome flock of 19 titmice, blues, coals, longtails and creepers found a net – time to pack in after almost four hours of intensive work.
We finished with a catch of 54 birds - 26 Redwing, 4 Chaffinch, 3 Goldfinch, 2 Lesser Redpoll, 12 Blue Tit, 2 Coal Tit, 2 Treecreeper, 2 Long-tailed Tit and 1 Goldcrest. 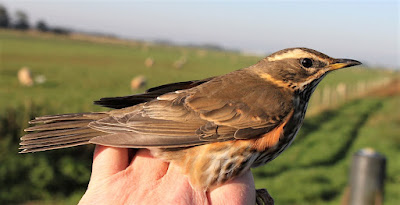 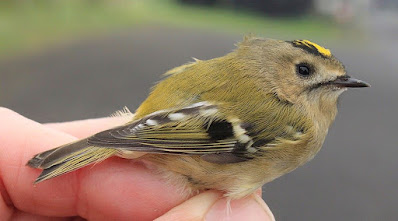 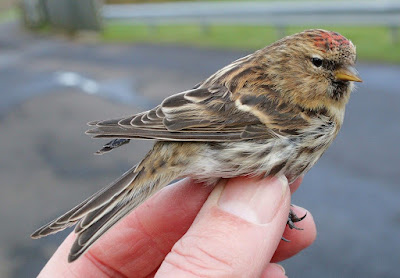 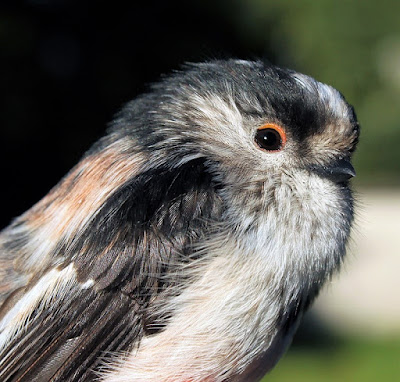 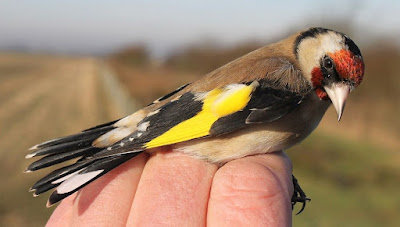 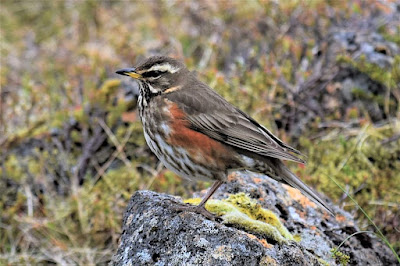 Redwing
It had been a good morning. It’s not everyone who sees 2500 Redwings in a single morning or witnesses at first hand the magic of bird migration.
More soon from Another Bird Blog. Don't go away.