Friday was on flat coastal fields at Cockerham, just south of Lancaster. Saturday a change of scene in the hills at Oakencolugh on the edge of Bowland Forest, the two places 15 miles apart and a good way from each other in their respective landscapes and the species they support.
We have a number of ringing sites from which to choose and to juggle for maximum effort and a concentrated catch but it’s far from an exact science where birds and the weather pool their resources and frustrate our best. The forecast for Saturday was reasonable enough at 8 mph and dry until early afternoon when rain would move in from the west.
The journey across the early morning moss roads was enlivened by a Tawny Owl that flew across the road ahead and then not 200 yards more, a Barn Owl alongside the road. As a strictly nocturnal animal local Tawny Owls are rarely seen in comparison to the Barn Owls that frequent. 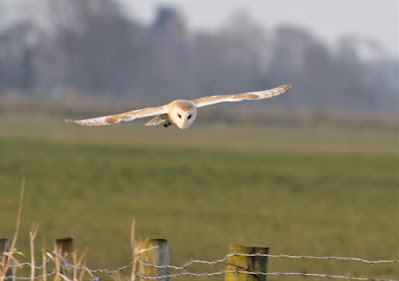 Barn Owl
This was a good start to anyone’s day and heightened expectations when Andy and I met at dawn in in readiness for the arrival of early October Redwings. To catch the first ones of the autumn always brings a thrill.
The potential problem was that even at this time of the morning the breeze was close to 15 mph and as soon as it became light we could see from our elevation that a good deal of cloud sat over the Fylde coast to the west and into Morecambe Bay to the north. The rain was on the way three or four hours before the expert predictions of Friday evening and even Saturday morning. 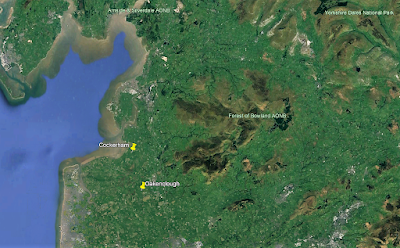 West Lancashire
We caught the "first" Redwing at about 0745 and then no more, even though in the next three hours we saw approximately 90 Redwings in small groups, most of them arriving from east or south east and then flying west without stopping. 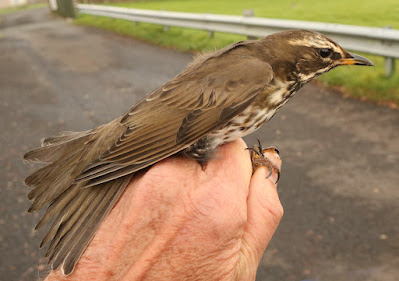 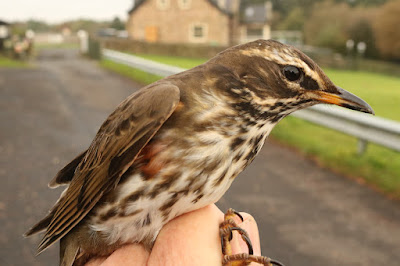 Redwing
A niggling wind and increasing cloud to 100% did little to help our cause as small flocks of finches, mainly Chaffinches and Goldfinches flew from north to south in opposite conduits to Redwings. The light was so poor that many a finch could be positively identified by close call only. We settled on roundish figures of 100 Chaffinch, 35 Goldfinch, one or two each of Siskin & Lesser Redpoll and 3 Pied Wagtail. 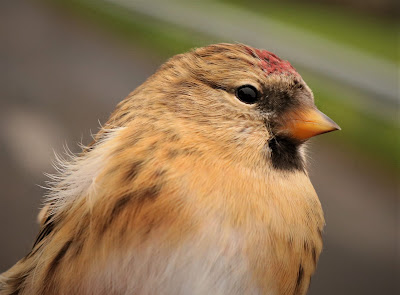 Lesser Redpoll
The Redpoll and the Redwing were just reward for our efforts, the remaining Wren, Blue Tit and Great Tit (2) a somewhat embarrassing result.
Drizzle rolled in slowly at first until 0945 when it became persistent. The wind dropped to near zero but too late and it was time to pack in and hope for better luck next time.