It was actually a grey day this morning on two counts, when Alice and I had a ringing session at the Nature Park, because we had full cloud cover throughout, and we also caught a few Grey Wagtails! Of course, Grey Wagtails aren't just grey as you know, because they have a contrasting splash of bright lemon yellow on their underparts. Gorgeous! 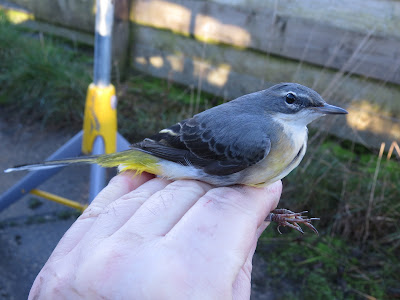 Grey Wagtail
It was a huge improvement on the three birds that we ringed just over a week ago, as we managed to ring 28 birds this morning as follows:
Reed Warbler - 3
Lesser Whitethroat - 1
Goldfinch - 9
Grey Wagtail - 7
Robin - 2
Blackcap - 1
Greenfinch - 4
Song Thrush - 1 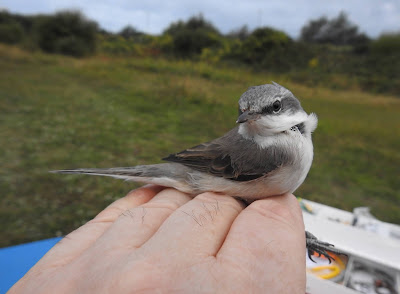 Lesser Whitethroat
In addition to the seven Grey Wagtails that we ringed, there was a further 15 birds that we didn't catch that headed south, after a brief detour to inspect the MP3 player singing just like a Grey Wagtail! And funnily enough, there was very little else on the move. A Tree Pipit headed north, as did a couple of Swallows (presumably heading in to the northerly wind), and a single Meadow Pipit headed south. Later on in the morning, 22 Pink-footed Geese headed high to the south, and that was it for visible migration.
The numbers of Starlings roosting have decreased, and there are perhaps just about 2,000 birds now. A couple of Cetti's Warblers were still singing, and other than the other warbler species that we ringed, a calling Willow Warbler was all we could add to the warbler score sheet.
The only raptors were a male and female Sparrowhawk that flew over the site during the morning, and a distant calling Raven rounded off what would have been a quiet morning if it wasn't for a half decent ringing session.
Yesterday, Gail and I had a walk along Jubilee Quay. It was a high tide, so all the mud was covered, and therefore we didn't record any waders. A few butterflies were active in the breezy conditions along the quay side, including the Small Copper below. 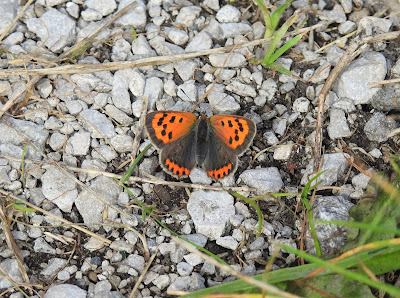 During the evening, I decided to see how many active Garden Spiders I could find in my small back garden, by counting the active webs i.e., a web with a spider in attendance, and I found 36. I don't think this is half bad, because as I said my garden is fairly small, but I do think it is testament to the number of invertebrates that are in my garden because of all the native plants and habitat.
I am hoping to get out birding/ringing during the week, but as always it will depend on the weather and work.