Saturday morning, 17 July. My usual ringing pal Andy is laid up for some weeks following his knee op this week. Regrettably that means he will lose his part time job as a Car Park Attendant as he won’t have the essential qualifications of a lop-sided limp - (his joke, not mine). There’s no way Sue will accompany me at 0600 and support the far end of a 60ft mist net while I tie the near end. She’s not keen to provide secretary duties either. Arrangements like that would probably cost me dearly in the way of a contribution to the Gordon’s Gin Empire.
Fortunately Billy No Mates knows of a quiet place where he can sit in a shaded chair with a couple of mist nets up and also bird with eyes and ears, even though in mid-July there’s not a lot to see or hear.
This venue is private with no one to trouble me except for the pesky sand flies that even through a shirt dig their needle teeth in as soon as they land. This is not a place to catch piles of birds but rather a place to watch the world go by and wonder how I have managed to stay sane for 18 months while the world around has gone completely insane.
The seed crop isn’t quite ready to split and drop but already the mass of flowers hold a myriad of insects and creepy crawlies. It’s no wonder then that a single net through the crop catches insect eating Sedge Warblers and Reed Warblers that visit here from a reed bed fifty yards away. 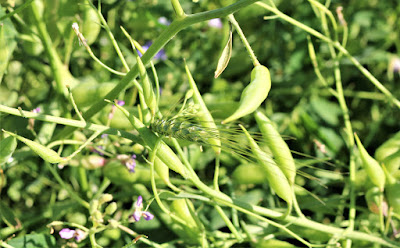 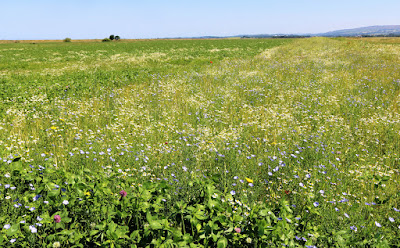 Seed Plot
So here’s a quiz for clued up non-ringers or even ringers who see few “acros”, acrocephalus warblers. The two pictures below show two ages of Sedge Warbler, an adult (male as it happens) and below that a juvenile born in recent weeks. Which is which? The differing stages of their respective plumage provide the answer. 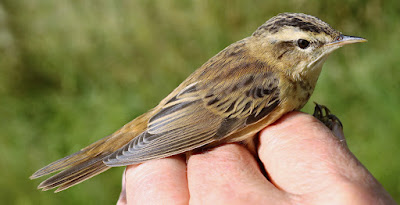 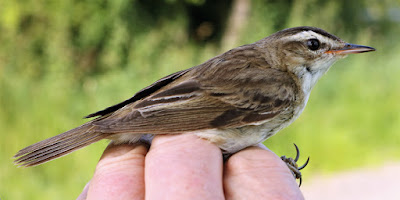 Sedge Warbler - adult
Differentiating the ages of Reed Warblers is less easy. At this time of year one of the best and quickest methods is to examine the wear on the primary flight feathers, especially at the tips. Birds of the year look fresh, new and unworn, whereas the equivalent feathers of an adult will be slightly worn and bleached at the outermost points.
See the two pictures below. 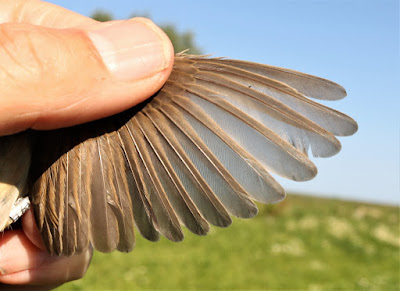 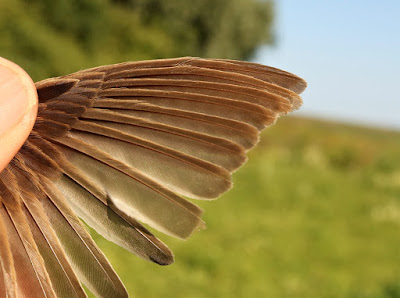 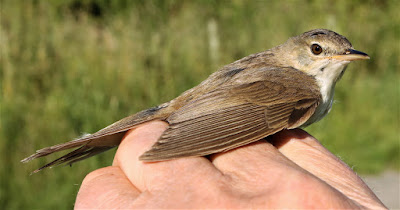 Reed Warbler
A stroll along the paths led to a locked gate and the farmer's sign “Bull in Field”, an essential to deter trespassers of many kinds.  As I looked over, the young bull stared back. He appeared d harmless enough with blunt, stubby horns and a kindly face, nothing like those steamy nostril Spanish bulls that trample bullfighters into the Iberian dust. 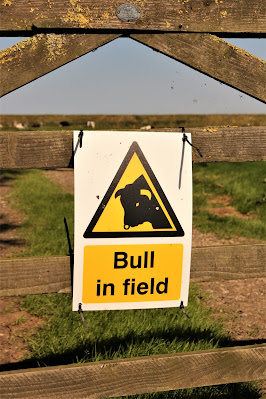 Beware of the Bull
As docile as the hulk appeared it’s best to never approach a bull, young or old, especially if there are heifers around. I also know to steer clear of the occasional Galloway cow found in local cattle herds; given the chance they can get fairly obnoxious and chase unwary birders across a field.
Half a dozen Reed Warblers, two Sedge Warblers and a Wren the sum total of my ringing efforts. Adult Reed Warbler AKH0265 was from elsewhere, further details will follow. A Common Whitethroat sat atop a nearby hawthorn bush, the berries green with youthful innocence and the “throat” an older male with a greying mop, a wise old bird that I didn’t catch. 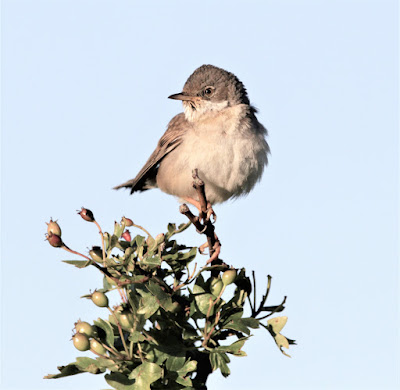 Whitethroat
Likewise an unexpected count of 35 House Sparrows and 40+ Swallows were my highest counts of both species this year. Sad to say not a single Swift crossed my path - a poor year for this species.
And sad to say, no other warblers where I might expect a couple of Willow Warblers and /or Blackcaps. 2021 - What a strange year in many ways when this cold spring followed the abysmal weather, poor breeding and low productivity of 2020.  There are no finches in the seed plot yet because natural seeds of the countryside are abundant for now, but the variety of the seed plot will work its magic soon.
All season I watched the secretive Tufted Ducks that gave nothing away as to where the nest might be. And then today the family, minus dad of course, toddled along the track and then dived off and into the pool as mom saw me ahead. 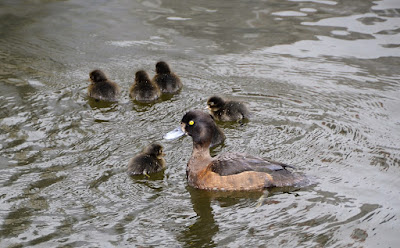 Tufted Ducks
On the waterway also - 3 Little Egret, 2 Little Grebe, 1 Grey Heron.  An entertaining morning for sure, even if there was no one to talk to except the birds or myself.