On what may be my last visit of the summer to the area, I was well pleased with the results of a saunter Marshaw-Tower Lodge-Trough Bridge on Friday. It was a toss up which event won the prize, but the flycatchers and sandpipers were in a neck and neck finish, and I reckon it was a dead heat! 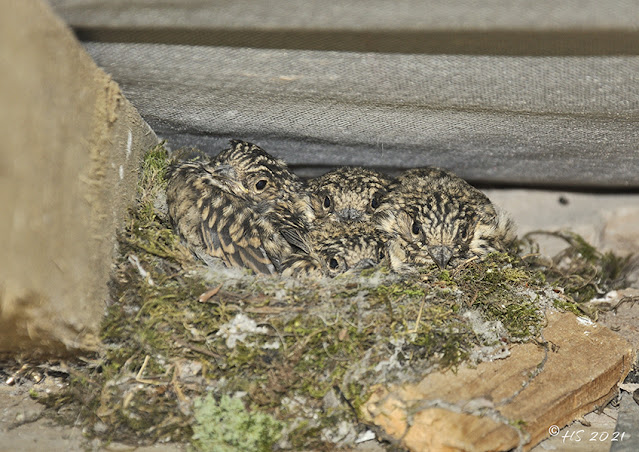 In the trees behind Tower Lodge, over a 15 minute watch, I got my second helping of 4 Spotted Flycatcher, including excellent views of a young bird begging with flickering wings. Equally rewarding was the sight of another Spotted Flycatcher, found in the mid-distance on the opposite side of the Marshaw Wyre. I've drawn the conclusion, probably three pairs of Spotted Flycatcher have bred in the area, despite my previous claim that just one pair have bred here this year, with one also found around the plantation at Marshaw on 22 June and subsequently seen again as recently as 13 July by Andrew Cornall.

Thanks to Howard Stockdale for his Spotted Flycatcher young in the nest. Howard had to apply for and was granted a permit to photograph these birds.

I was very pleased to find 8 Common Sandpiper today on the Marshaw Wyre. Hearing the call presumably to young out of sight, I soon had views of a bird flying off downstream, eventually followed by four more, seen as a family of 5 Common Sandpiper, the other three were seen later enroute to Trough Bridge.

Finding 6 Grey Wagtail has continued the poor show in the area this year, and I've yet to find a Dipper here. A Great-spotted Woodpecker and Nuthatch seen whilst watching the flycatchers, and later a Kestrel were the only other birds in the book. Butterflies were sparse, 4 Meadow Brown, 3 Small Heath, 3 Large White, and a Small Tortoiseshell.

On my way back to Lancaster, I decided to look in on the bog at Birk Bank, where I had a few sightings of a male Keeled Skimmer, but was never able to say more than one seen. I also had a Black-tailed Skimmer, Four-spotted Chaser, and a Large Red Damselfly. After about 45 minutes and was about to leave, another dragonfly came into view, it was soon joined by another to give me excellent views of 2 Golden-ringed Dragonfly in an aerial confrontation.

We had a first ever Small Skipper in the garden, and 2 Buzzard soared together  yesterday. 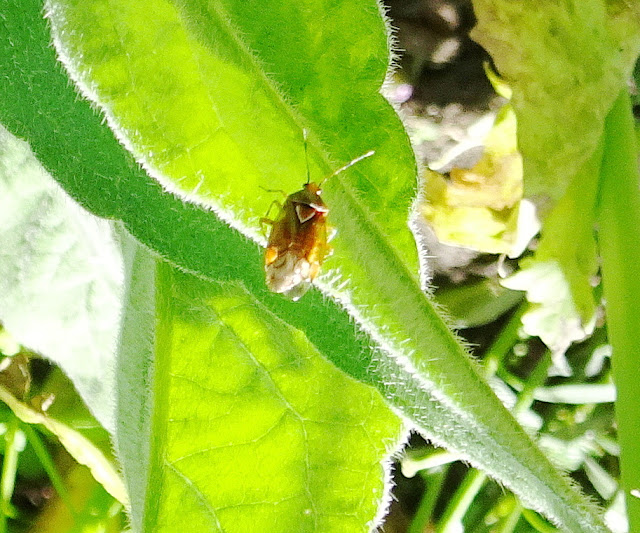 Thanks to Paul who tells me this is a mirid bug, and given the poor image quality, might be Deraeocoris flaviliea in the garden recently.