Saturday morning. The First of May began bright and cold again. I waited an hour or two until the sun burnt off the frost and then drove north, hoping for a quiet walk in the warming sun and fresh air.
They came along the private track, four adults and two dogs against the skyline. Urbanites on their May Day weekend. The egret saw them coming and flew off with loud protests.
Hunkered down in the car and concentrating through the viewfinder, I'd not seen the intruders headed my way. Thankfully the townies took the other direction and left me in peace. Such are the joys of trying to bird now that lockdown is all but over when the countryside become a free for all again. 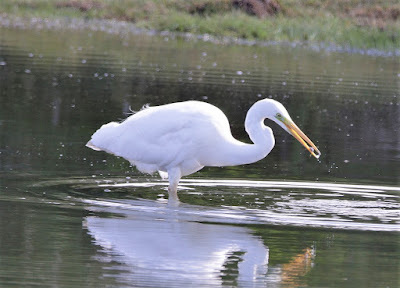 Great Egret
I disturbed a Buzzard from the fence line but it made no sound as it slipped away perhaps thinking I'd not seen it in the exact same place for a couple of weeks. The local Carrion Crows gave the Buzzard a noisy send off . 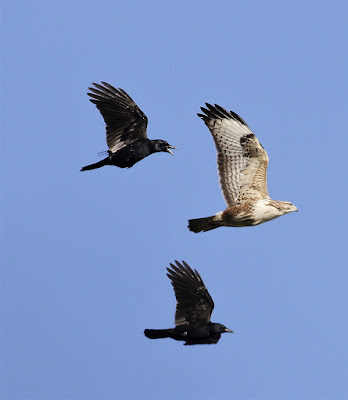 Carrion Crow and Buzzard
Along the track two pairs of Redshanks showed all the signs of having nests nearby. Oystercatchers too, piping and wary.  And a Lapwing called to youngsters to get their heads down - “Mayday, mayday”, and then circled and flapped to make sure the danger had passed. The young Lapwing were in the longer grass of a ditch, safe enough and hidden from a ringer's view.
The sun came from the wrong direction. Overexpose the only way to get some sort of picture. 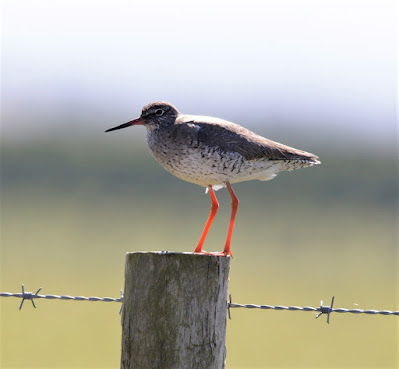 Redshank
The Wheatear on the other side of the sun made for easier viewing even though it kept a safe distance. 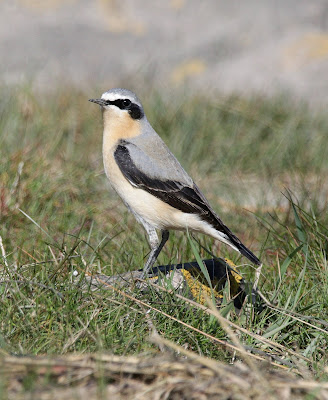 Wheatear
The ditches also held 3 Little Egrets and a Grey Heron. On and in the reed fringed edges of nearby pools came 2 Pied Wagtail, 4 Sedge Warbler and the snapping song of 4 Reed Warblers. A couple of Swallows whizzed by; so good to see a few at last. No House Martins seen but the farm hand reported seeing House Martins and a Whitethroat on Friday. 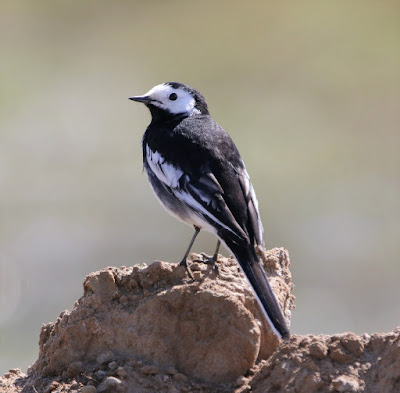 Pied Wagtail
On the water - 4 Greylags with young, 2 Canada Geese with young, 2 Shelduck, 4 Moorhen, and then 2 Coot with their early brood. 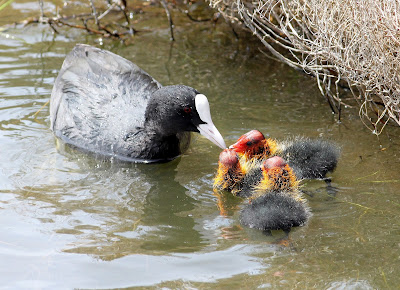 Coots
And now on Sunday morning we have a hailstorm. No kidding!  Help.