Here we are again. As promised in yesterday's blog post when the sighting of a less than common Great Egret at Cockerham provided the Monday Highlight.
After recent unremarkable ringing sessions and the sum total of ten birds caught, I met Andy at 0630 at Oakenclough on Tuesday in the hope of a change in our bird ringing fortunes.
We had a better catch and even managed to achieve double figures. Once again, on a clear bright morning the visible migration was nil except for the few Lesser Repoll that sneaked in unseen. Lesser Redpoll was the most ringed bird today with 6 Lesser Redpoll, 3 Willow Warbler, 2 Chaffinch, 1 Goldfinch, 1 Robin and 1 Wren.
One of the six Lesser Redpoll AHK 3973,a second year female was a “control” - a bird ringed elsewhere. 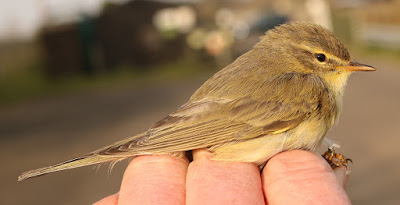 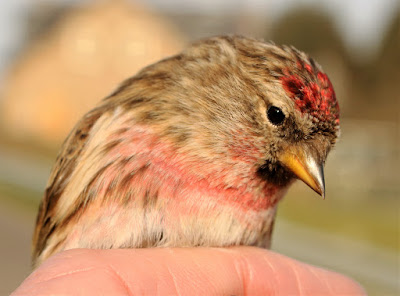 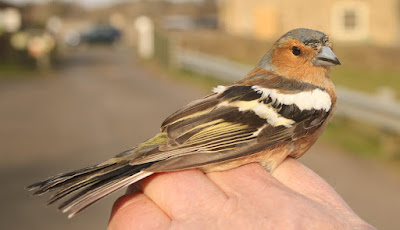 Chaffinch
It seems that many of the Greylags on site laid their eggs at similar times. Today saw a number of crèches of adults with similarly sized youngsters. The crèche strategy is common amongst a number of geese & duck species and one that increases the survival rate when so many pairs of eyes serve to watch over the youngsters pooled together with three, four or more adults. 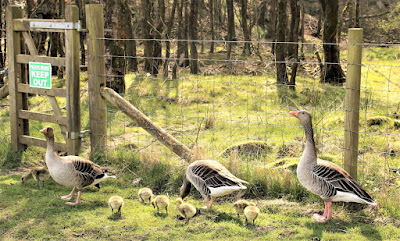 Greylags
When the ring details of Lesser Redpoll AHK3073 are entered into the BTO online database back home we will learn about the original ringing information within a few days.
The British Trust for Ornithology online database of DemOn has many possibilities and choices available for ringers to record their catches. The data ringers collect is real and in real-time, not made up as they go along. For instance, we collect a minimum of: 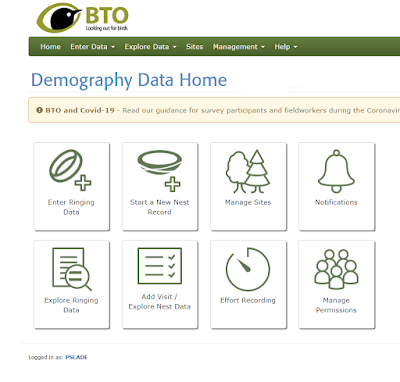 DemOn
Even when we catch very few birds the info we collect still adds to the vast database of information on birds' lives and their survival, all of which aids conservation science.
“Science is the pursuit and application of knowledge and understanding of the natural and social world following a systematic methodology based on evidence.”
Most volunteer ringers probably class themselves as citizen scientists of varying degrees of application and expertise. They share and contribute to both national and international data monitoring programs through sharing information across the continents and countries through which birds migrate at many different times of year.
Stay tuned. There's more birding, ringing and photos soon.