I am stuck in my home office today, but every so often I venture out into the garden and look skywards with both my eyes and my ears! I usually record a bit of vis, mainly passerines, but now and then something interesting goes over.
This afternoon was one of those 'something interesting goes over' occasions. I was stood on my 'vis chair', as I call it, that gives me a better view over the neighbouring houses, gardens and most importantly the sky. A few Gulls were behaving a little bit odd, alarm calling half-heartedly, but certainly not enough to make me think there was an interesting raptor around. Usually, if there's an interesting raptor abou,t they go absolutely ballistic!
Anyway, I decided to have a scan round just in case, and there to the west I picked up a female type Marsh Harrier heading south, over what I know would be the coast. It was in a hurry, mainly because it was trying to shake-off its Gull escort! A new bird species observed from my garden/house, taking the total to 72. Well, I think it's 72 as I'm not very good with lists, or at least not very good at keeping them up to date. In fact, the only list that I keep in some sort of order is my 'house list'! 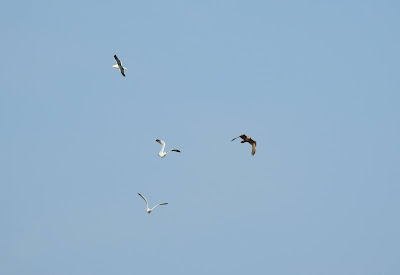 Not the Marsh Harrier from this afternoon, but one that I had more or less
to the day this time last year at the Nature Park. Also, complete with a Gull
escort!