Monday morning. After the school run I tripped to Cockerham for an hour or two and a walk on Richard and Helen’s farm. Maybe I would meet up with some of the migrant birds still missing from our delayed spring?
There’s a little copse with a pool and a reed bed that held singing Chaffinch, two pairs of Mallard, a Grey Heron, and a couple of sweet singing Willow Warblers. From the woodland came no sound of Blackcaps or Chiffchaffs, just a loud Wren, the flapping of Wood Pigeons and a wheezy Greenfinch, residents all. In the dry looking reed bed but from where I heard a Moorhen in the depths, no Reed Warblers and no Sedge Warblers, not even a Reed Bunting, the partial migrant. 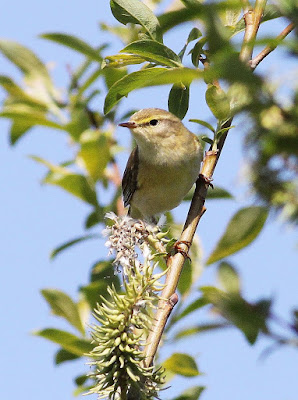 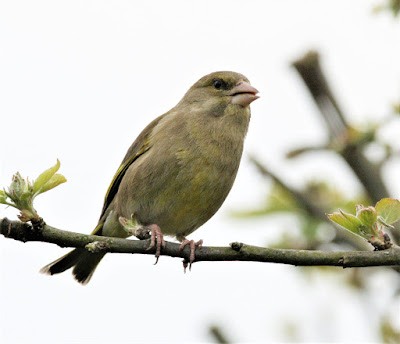 Greenfinch
A Buzzard flew from behind me and landed on the fence some 70 yards away; about as close as our local Buzzards will tolerate us humans. When I jumped from the car to open a farm gate, the Buzzard flew off pursued by crows. Leaving a car causes our persecuted Buzzards to stay even further away from a possible gun. 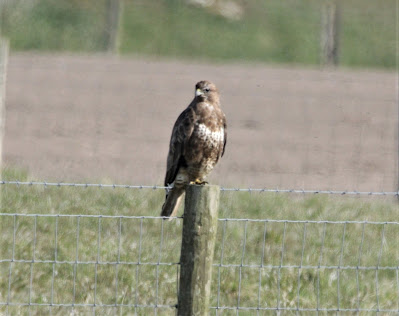 Buzzard
Behind the sea wall I came across the usual Little Egrets, another Grey Heron and then the raucous calls of a Great (White) Egret. I’m not sure why the experts dropped the “white”, but for many birders, the now abandoned name of Great White Egret is more descriptive. 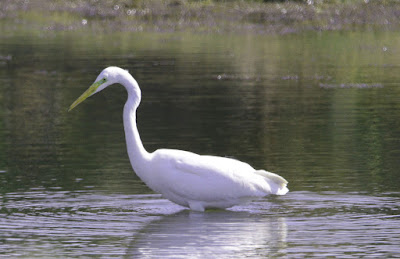 Great (White) Egret
The “becoming commoner” Great Egret seems to show the same tolerance levels as our Grey Herons and for sure this newcomer will fly off if birders approach too close. I left the egret fishing the pool close to its smaller cousin the Little Egret.
Alongside the sea wall came a single Wheatear, three pairs of Oystercatcher, (two on eggs), 6 Redshank, 2 Pied Wagtail, 8 Linnet and 6 or 7 Skylarks. No Swallows on the move and none seen in three hours. What a strange spring this is.
There’s a ringing session pencilled in for Tuesday where for sure we will see those missing migrants!
Join me then and see what we catch.