As I am completing the final visits at two wintering bird survey sites, I suppose it's apt that the weather has reverted back to winter. There's been snow up and down the country, and some quite substantial falls in northern Scotland. Even in coastal Lancashire, there has been a few flurries, not what you have in mind for April!
The wintery weather over the past week or so, with cold northerly winds, has slowed migration down to a trickle. It feels like it will be one of those springs where migrants slowly find their way back to their breeding grounds, without any of the excitement of decent movements on the coast. Having said that, it is still relatively early, and I'm sure there will be a few good days.
This morning wasn't a good day, and it was very, very quiet over the four and a half hours I spent in the field in coastal northwest Lancs. I'll cut to the chase, I had five summer migrants of two species, two Chiffchaffs and three Swallows. And as I sit here looking in my notebook for inspiration, I am struggling to report anything else of interest. I could mention a single Great Spotted Woodpecker, a pair of Teal and Lapwings, a handful of Goldfinches, Linnets and Meadow Pipits over, and that would be it! Perhaps best to move on. 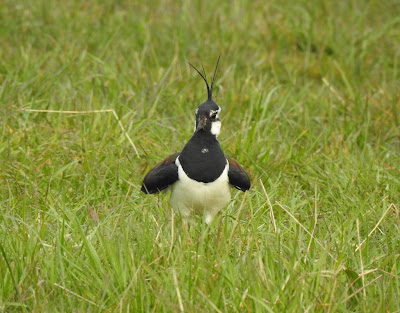 Lapwing
Over on the right, you will see that I have updated the ringing totals for Fylde Ringing Group up until the end of March. Nine new species for the year were ringed during the month, and these were Jay, Meadow Pipit, Siskin, Lesser Redpoll, Treecreeper, Greenfinch, Wren, Chiffchaff and Blackcap.
Below you will find a list of the top three ringed during March, and the top six 'movers and shakers' for the year.
Top 3 Ringed in March
1. Chaffinch - 23
2. Blue Tit - 15
3. Coal Tit - 11
Top 6 Movers and Shakers for the Year
1. Linnet - 60 (same position)
2. Blue Tit - 46 (same position)
3. Chaffinch - 43 (up from 4th)
4. Great Tit - 27 (down from 3rd)
5. Coal Tit - 24 (same position)
6. Goldfinch - 14 (straight in)