...the migration slows. Well, not quite, as it is Spring, and even when the wind does turn northerly as it has done over these past few days, and is forecast to stay the same over the next few days, a few birds still battle through. And this morning was a classic example. Nothing rare, no large numbers, but a few birds in unsuitable conditions.
It wasn't an unpleasant morning, although I did have to scrape ice off my car windscreen first thing, and I had clear blue skies with a cold, light north-easterly wind. As soon as I stepped out of my front door, I had nine Meadow Pipits heading north, an indication of the kind of morning it would be. It is often the case when we have a high pressure system sat over us and winds are from the north, that you get a little rush of migration for an hour or so and then it dries up.
I headed to the Nature Park at the Obs where the pools are located, as I wanted to check what the water levels were like, and to see whether I could get in yet to do some ringing. To give you a clue as to what the water levels were like, two Coots swam over where I usually park my car, so I think that sums it up!
It was some singing birds that first made it into my notebook, and a Song Thrush was singing loud and clear, and repeating its lines, and an 'explosive' Cetti's Warbler sang from just the other side of the wall. I recorded five singing Cetti's Warblers from around the site, although it isn't always easy to be certain how many there are, as they do move around a fair bit.
On the bridge across the artificial pool, there were three bird photographers stationed along it, and when I left, I could see six of them. I still don't understand bird photographers, and I'm being cautious in labelling these folk as bird photographers, because I take photographs of birds myself, so does that make me a bird photographer? I think what I should say is that I don't understand 'some' or 'all' bird photographers. They all had lenses on their cameras, bigger than my telescope, and they were taking pictures of some exceedingly tame and close Tufted Ducks and Great Crested Grebes!
I watched one guy walk on to the bridge and straight past a singing Cetti's Warbler, and he didn't even flinch! And, as you know, these birds have a very loud, explosive song as I am fond of saying. Now, it might be that he was super cool, and he had logged the Cetti's in his brain, but I doubt it. As I walked past them there were Meadow Pipits and Linnets flying over calling, a migration spectacle, and not one of them looked skywards. Mind you, they probably couldn't hear anything above the noise of all those shutters continually going off on their cameras. A beautiful male Stonechat was singing its heart out, just at the end of the bridge, I could hear it as soon as I stepped on to the bridge, but there was no response from the photographers! I didn't even see a pair of bins on any of them. Like I said before, I don't understand 'some' bird photographers! Mind you, I don't understand some birders either, but that's another story. 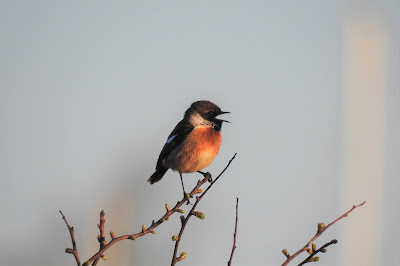 The singing male Stonechat. The bird photographers with their big lenses
could have got a far better shot than me, if only they knew it was there!
On all of the pools combined I counted three Little Grebes, six Mallards, 15 Coot, 40 Tufted Ducks, two Canada Geese, two Great Crested Grebes, two Shelducks, two Mute Swans, two male Shovelers, three Greylag Geese and a Snipe. 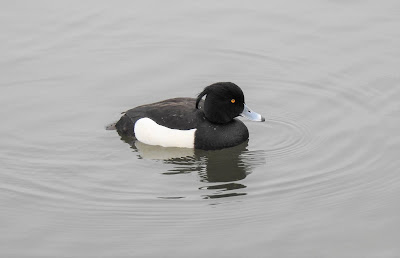 Tufted Duck
As I hinted at before, there was a bit of vis this morning, and I stood for a while in the shelter of one of the stone walls and recorded (all north) a Sand Martin, 110 Meadow Pipits, four Woodpigeons, eleven Linnets and two Siskins.
I detected a few grounded migrants this morning in the form of two male Wheatears, two Willow Warblers, a Chiffchaff and a male Blackcap. The male Blackcap flitted through some Bramble that I was stood close to, counting the vis. 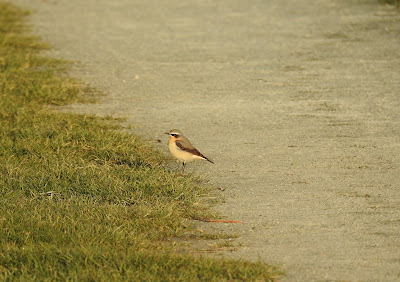 Wheatear
Driving off the site a female Sparrowhawk flew across the road, and I headed to the cemetery for a quick look. As expected, it was quiet. The vis had slowed down, and the only grounded migrants were two Coal Tits. I could see and hear them calling excitedly from the top of a pine tree, and they suddenly launched themselves into the air, and started flying round in circles gaining height. I was waiting for them to head off north or east, when they changed their minds and dropped back down to the trees! Perhaps they weren't ready to go just yet. 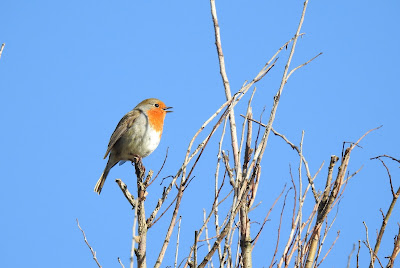 One of the two Robins singing in the cemetery this morning
As I said before, it's remaining northerly for a few days yet, but I'll keep plugging away because it's spring, and unlike autumn, migrants still come through even when the conditions aren't perfect.